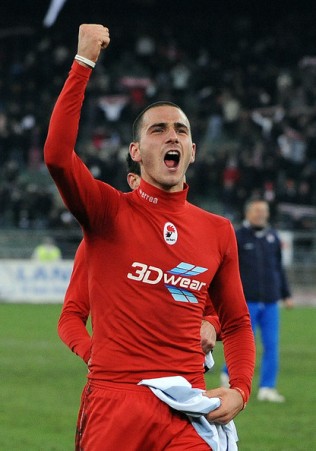 Leonardo Bonucci (born 1 May 1987) is an Italian footballer who plays as a defender for Serie A club Bari. He is a centre back, but can also play on both wings.

Bonucci started his career at Viterbese but loaned to Internazionale in summer 2005.

Bonucci made his Serie A debut in the last match of 2005–06 season, against Cagliari Calcio. At the end of season Inter bought Bonucci outright.

In January 2007, half of the registration rights was sold to Treviso, along with Primavera Team team-mate Daniel Maa Boumsong, but remained at Inter until June 30. While the latter already spent first half of the season on loan at Treviso. They would met another Inter partially owned player Alex Cordaz. At the last season with Inter's U-20 Youth Team, he won the champion.

On 1 July 2007, along with Maa Boumsong they officially became Treviso player. To compensate Treviso that sold Robert Acquafresca back to Inter in June, Inter sold Federico Piovaccari in co-ownership deal, made there were 3 players joined Treviso from Inter that season. At Treviso, Bonucci played 20 starts in 27 Serie B appearances as one of the regular starter.

In June 2008, Bonucci was the only player that bought back by Inter from Treviso but he was remained at Treviso on loan. To compensate Treviso (for Bonucci and mid-season signing Riccardo Bocalon and Jacopo Fortunato) and to give a chance to youth players, Treviso hired Gianluca Litteri and Daniele Pedrelli in co-ownership deal.

Bonucci played 13 Serie B matches for Treviso before left for another Serie B struggler Pisa Calcio on loan.

On June 8, 2009, Bonucci underwent a medical examination at Genoa. On July 1, Inter officially announced Bonucci, along with Robert Acquafresca, Francesco Bolzoni and Riccardo Meggiorini, transferred to Genoa, as part of the deal that sent Thiago Motta and Diego Milito to Inter. Moreover, Ivan Fatić who co-owned between Chievo and Inter, became co-owned between Chievo and Genoa.

At Bari he has become first choice in central defence under head coach Giampiero Ventura, showing a composed yet strong and effective defensive style. He has formed an extremely strong partnership with Andrea Ranocchia which has been so effective that, as of the midway point in the 2009–10 season, Bari have the second best defensive record in Serie A. The strong partnership ended after Ranocchia injured in mid-season and ruled out from rest of the fixture.

Bonucci never received call-up from Italy youths team but his team-mate Andrea Ranocchia, 1 day "team-mate" Domenico Criscito, Salvatore Bocchetti and former Inter team-mate Marco Andreolli did. But after impressive season at Bari, he received his first call-up from Italy senior team in February 2010 for a friendly match against Cameroon. Half of Marcello Lippi's experimental squad were in-experienced players and 3 of them (include Bonucci) received their first call-up, partilly due to injuries of the regular starter. He was included in the starting line-up along with national team regular Fabio Cannavaro, Giorgio Chiellini to form the defense line in the 343 formation.
Honours and awards

You have to ask my permission first.

I just gave myself one in the bathroom.

You can just copy his profile in the transfer thread.
OP

Yeah, but I was gonna wait for the official news, even though it's done. Just so I could add transfer details below. No worries.

DO well with Giorgio Leo.

Is there anything more wonderful than a young Italian CB?

Welcome to Juve, and be prepared to create history!

Dule90 said:
Place of birth: Viterbo, Italy
Click to expand...
I lived there for 2 weeks

Welcome Bonucci, we will have 2 big and tall centerback next year.